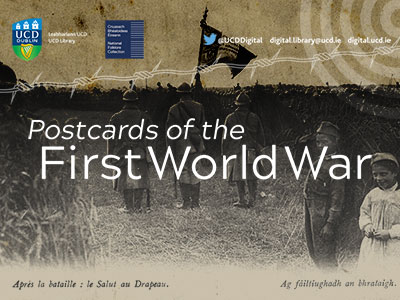 UCD Digital Library and the National Folklore Collection are pleased to present a collection of postcards depicting images from World War I.

This unique little collection contains 18 postcards with descriptive titles in French and/or Irish, while the text on the reverse of each postcard is in Irish.

The dates of publication for the postcards are unknown, although generally a publication date of after the start of the war in 1914 has been inferred, with some of the postcards featuring images which are dated 1917.

The postcards were among papers discovered in a building on North Great George’s Street, Dublin, which had been taken over by the Civil Service Staff Officers Association during the 1960s, and were donated to the National Folklore Collection at University College Dublin in 2016.

While not a large collection, these postcards are significant in their depiction of images from many battle sites of the Western Front, including Marne, Verdun, Alsace, and along the River Aisne, and of American soldiers in World War I.

View the collection at https://digital.ucd.ie/view/ucdlib:53390.