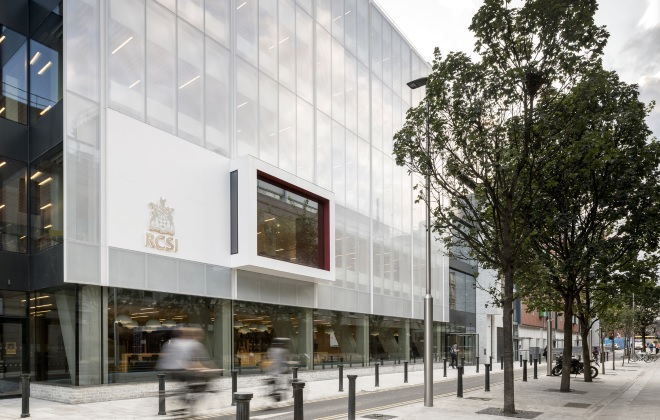 Friday, 8 June 2018: The Royal Institute of the Architects of Ireland (RIAI) has announced RCSI‘s 26 York Street as the winner of the Public Choice category at the RIAI Irish Architecture Awards 2018. The healthcare education facility, designed by Henry J Lyons, was announced as Ireland’s favourite building in advance of the annual awards which celebrate the important role that architecture plays in delivering Ireland’s societal and economic infrastructure.

RCSI’s facility at 26 York Street puts Ireland at the global forefront of pioneering developments in the delivery of healthcare education. This state-of-the-art building, over 10 floors – six above ground and four below provides undergraduate students, surgical trainees and staff with modern cutting-edge facilities that promote the development of the RCSI community at the heart of the city. The design supports the diverse demands of healthcare education while also encouraging social interaction.

The building is home to Europe’s most advanced clinical simulation suite, in the new National Surgical & Clinical Centre, and also includes a 540-seat auditorium, a library spanning three floors with 500 study spaces, a sports hall and fitness suite, and has been designed to be both energy efficient and environmentally responsible.

This €80m revolutionary building enables RCSI to promote innovation in learning to educate healthcare professionals who will lead the world to better health.

Announcing the award, David Browne, RIAI President said, “The winning project demonstrates the importance of investing in our educational sector and architects’ ability to deliver outstanding buildings in complex urban settings. This is the 10th year that members of the public have had an opportunity to vote on their favourite architectural project and the high number of votes cast demonstrates how passionate we as a nation are about the environments in which we live, work and relax.”

Professor Cathal Kelly, RCSI CEO/Registrar, said: “We are delighted to have 26 York Street named as the winner of the Public Choice Award at the RIAI Irish Architecture Awards 2018. Receiving this award acknowledges the outstanding design by Henry J Lyons and excellence in architectural construction that made RCSI’s ambitious a reality. What happens at this facility will contribute to significant advances in healthcare education and subsequently breakthroughs in patient care and outcomes.”

The facility is the largest and most modern facility of its kind in Europe, providing hands-on practical, professional healthcare training in multiple learning and study environments. The centrepiece of the building is the 12,000sq ft Simulation Centre, which is laid out over three full floors. Here, students and healthcare professionals have access to a world class surgical and training suite with clinical skills laboratories, a mock operating theatre and clinical training wards.

About the RIAI Irish Architecture Awards

The RIAI Irish Architecture Awards are the most prestigious awards of their kind in Ireland. They celebrate the quality of current work by RIAI Members at home and abroad and create awareness of the important role that architecture plays in delivering Ireland’s societal and economic infrastructure.

The full list of RIAI Irish Architecture Awards winners will be announced this evening at an awards dinner at the Mansion House, Dublin.

RCSI is ranked among the top 250 (top 2{dea66ac5b5a7baf2835bc690708c9e35db78c57679fea2046a6f7128aa441784}) of universities worldwide in the Times Higher Education World University Rankings (2018) and its research is ranked first in Ireland for citations. It is an international not-for-profit health sciences institution, with its headquarters in Dublin, focused on education and research to drive improvements in human health worldwide. RCSI is a signatory of the Athena SWAN Charter.