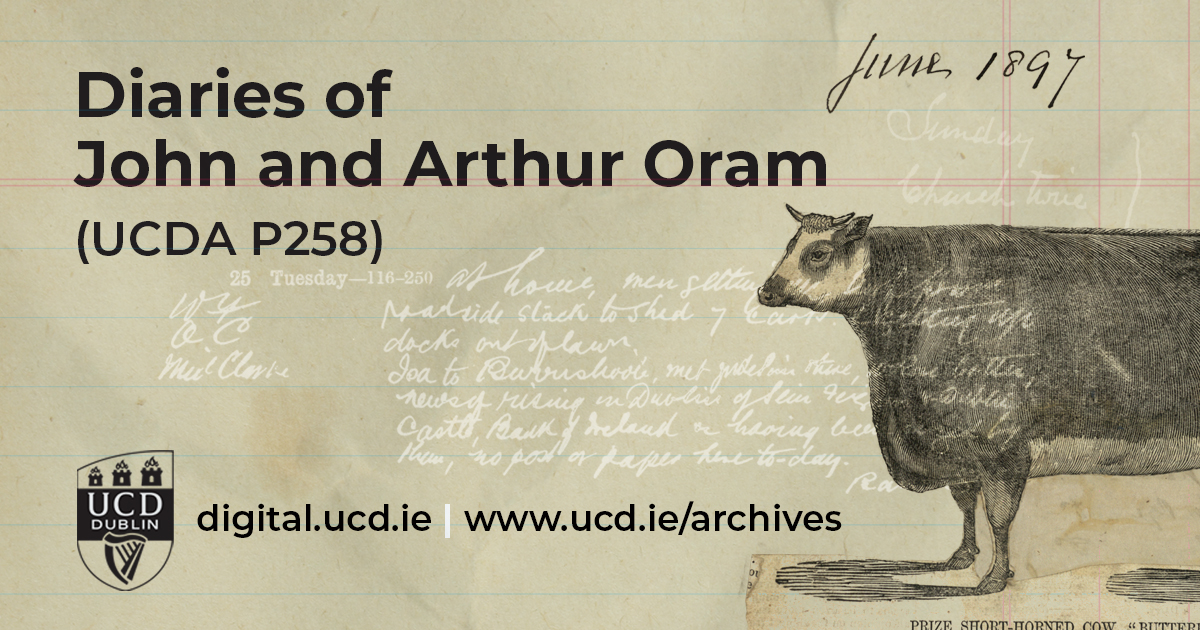 UCD Digital Library and UCD Archives are delighted to present the Diaries of John and Arthur Oram. Father and son, John and Arthur Oram were farmers and land agents in Burrishoole, County Mayo. Their diaries hold a wealth of information on farming life and estate management, covering the periods 1854–1907 and 1887–1919. As well as documenting day to day rural life, the Orams recorded the weather for each day and often referred to significant national and international events.

Born in Somerset in 1824, John Oram moved with his young family to the West of Ireland in 1853 to become the land agent for the estate of Captain Wyndam at Burrishoole, County Mayo. Apart from a few years in the mid-1870s which he spent in England, John continued to farm and carry out his agency work at Burrishoole until September 1881 when he returned to live in England. His son, Arthur Oram, took over his father’s business when John returned to England and remained at Burrishoole, farming and carrying out agency work, for the rest of his life. He died on 6th of August 1919.

In addition to their land agency work, both John and Arthur farmed land in the areas surrounding Burrishoole. Their diaries record many details of farming life such as the planting and harvesting of crops, trips to livestock markets, and repairs to farm buildings. As land agents, the Orams’ duties included collecting rents and negotiating with tenants in arrears.  The growing tensions between landlords and tenants impinged directly on their personal lives, with John Oram surviving a shooting in October 1872. Scattered among the accounts of everyday life are references to events of national and international importance: a famine in 1879; the foundation of the Land League in 1879; the 1882 Phoenix Park murders; the death of Queen Victoria in 1901; the sinking of the Titanic in 1912; news of a Rising in Dublin on 25 April 1916; and the 1918 influenza epidemic.

Relevant to those with an interest in agriculture, landed estates, meteorology, as well as the general history of Ireland at the time, the diaries are also fascinating as a record of the intricacies of human life. The most poignant and personal moments are recorded, including John’s entry for the death of his beloved wife in April 1906 and, in April 1907, Arthur’s record of John’s own passing.

The diaries were deposited in UCD Archives by Carolyn Sturdy and Christopher Oram in June 2012, and can now be viewed online at https://doi.org/10.7925/drs1.ucdlib_256149

The UCD Digital Library is an institutionally supported, preservation-oriented digital repository that holds a freely available, globally accessible, heterogeneous collection of resources from UCD’s cultural heritage repositories and an increasing number of data assets captured or produced by UCD research activities. It is accessible at https://digital.ucd.ie.