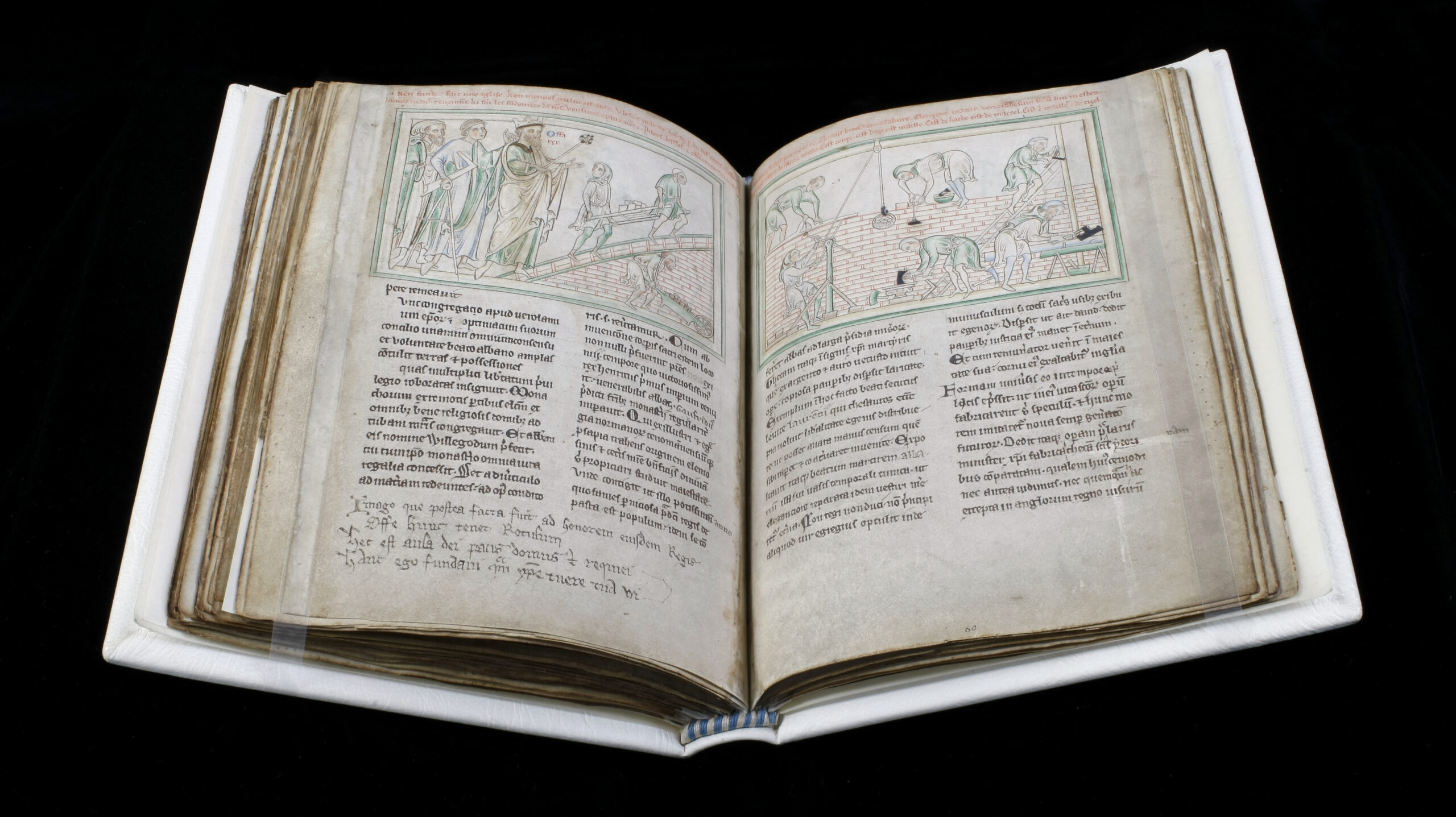 One of the most finely illustrated medieval manuscripts, Matthew Paris’s Book of St Albans has been digitised by the Library of Trinity College Dublin for the first time. The 13th century masterpiece features 54 individual works of medieval art and has fascinated readers across the centuries, from royalty to renaissance scholars.

The precious manuscript survived the chaos and trauma of the dissolution of the monasteries and came to Trinity College Dublin in 1661.

Created by the renowned scribe, the Benedictine monk, Matthew Paris of St Albans Abbey in England, the manuscript chronicles the life of St Alban, the first Christian martyr in England. It also outlines the construction of St Albans cathedral.

The monastery at St Albans was one of the most important in the country. It was a major site of pilgrimage receiving many pilgrims from Ireland.

The book was held in St Albans Abbey for 300 years until the dissolution of the Abbey in 1539.

All other precious manuscripts by Matthew Paris are held in the British Library, and the Universities of Cambridge, Oxford and Chetham’s Library Manchester.

The Book of St Albans was a high-status book, viewed by King Henry VI. Written in Latin it also contains Anglo-Norman French which made it accessible to a wider secular audience including educated noble women.

It was borrowed by noble ladies of the period, including the King’s sister-in-law Countess of Cornwall, Sanchia of Provence, and others.

The content at times gruesome, include illustrations featuring the decapitation of St Alban and his executioner whose eyes literally pop out of his head at the point of execution.

The artwork consisting of mostly framed narrative scenes, is a tinted drawing technique where outlined drawings are highlighted with coloured washes from a limited palette. This technique was distinctly English, dating back to Anglo Saxon art of the 10th century.

From St Albans Abbey, it came into the ownership of the Elizabethan Royal adviser and astronomer, John Dee, following which it was sold to James Ussher, Archbishop of Armagh, and subsequently came to Trinity with his library in 1661.  It has remained in the Library of Trinity College Dublin for over 350 years.

For the first time, this manuscript is now fully digitised and available online, a process which has been undertaken through the Virtual Trinity Library initiative as part of its Manuscripts for Medieval Studies project funded by Carnegie Corporation of New York.

The Book of St Albans has been fully digitised ahead of the feast day of St Alban, tomorrow Wednesday, 22nd June.

“The Library of Trinity College Dublin is delighted to make this medieval masterpiece accessible to a global audience. For the first time in history, this exquisite manuscript by one of the world’s most famous medieval artists and chroniclers, Matthew Paris may be viewed digitally revealing its beautiful artistry in full colour. As part of the Virtual Trinity Library’s Manuscripts for Medieval Studies project it contributes to teaching and research at Trinity College Dublin and has fostered collaboration with other universities and libraries.”

Virtual Trinity Library is a digitisation initiative of the Library of Trinity College Dublin’s most valued collections. It will conserve, catalogue, curate, digitise and research these unique collections of national importance, making them accessible to a global audience, from schoolchildren to scholars.

Manuscripts Curator, Estelle Gittins said: “This astonishing manuscript contains some of the most incredible medieval art, it is a window into an elaborate world of saints, kings and knights, but also sailors, builders and bell ringers. Before now the only way to study all of the images in this important manuscript was to consult the rare, black and white, 1924 facsimile edition, it is so exciting that this can now be viewed and enjoyed by everyone at the click of a button.”

Virtual Trinity Library’sManuscripts for Medieval Studies project which was philanthropically supported by a grant from Carnegie Corporation of New York, has focussed on 16 medieval manuscripts of international research significance. The manuscripts are used for teaching on the Trinity M. Phil in Medieval Studies course. The selection demonstrates the breadth and variety of the Library’s collections of source material for the study of the art, history, culture, language and literature of the medieval period, and the history of the book in particular.

Other works digitised as part of this project include the highly decorated 12th century manuscript, the Winchcombe Psalter and surviving manuscripts of St Augustine’s Abbey, Canterbury and Salisbury Cathedral, medieval music from Britain and Ireland, and a rare 15th-century life of St Thomas Becket.

View the video at https://www.youtube.com/watch?v=ueIv6aEalio